Anterior cruciate ligament (ACL) injury is one of the most commonly seen injuries in sport and has a devastating influence on patients activity levels and quality of life.

Complete ACL rupture can induce other pathological knee conditions including knee instability, damage to menisci and the chondral surface. This can lead to early onset of osteoarthritis.

Athletes who participate in high demand sports like soccer, football, and basketball are more likely to injure their anterior cruciate ligaments. Female athletes had a higher incidence of ACL injuries compared with their male counterparts. Studies have shown that the incidence in female athletes is two to eight times higher than in males in soccer, basketball and volleyball.

Three bones meet to form your knee joint: your thighbone (femur), shinbone (tibia), and kneecap (patella). Your kneecap sits in front of the joint to provide some protection.

Bones are connected to other bones by ligaments. There are four primary ligaments in your knee. They act like strong ropes to hold the bones together and keep your knee stable.

The anterior cruciate ligament runs diagonally in the middle of the knee. It provides approximately 85% of total restraining force to prevent the shin bone from sliding out in front of the thigh bone, as well as provides rotational stability to the knee. To a lesser degree, the ACL checks extension and hyperextension 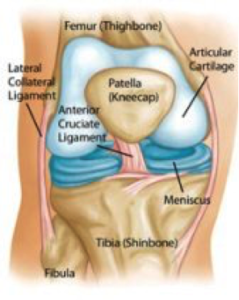 ACL tears typically occur during activities placing excessive strain on the ACL. This generally occurs suddenly due to a specific incident, however, occasionally may occur due to repetitive strain. Movements that place stress on the ACL include:

More than three quarters of ACL injuries have been reported to occur in noncontact situations (no direct contact to the knee when knee is injured), mostly while performing sports. A person typically reports feeling a popping sensation in the knee, as well as a rapid onset of considerable swelling (within the first few hours following injury).