Running is a popular fitness choice for many Port Stephens residents. It is inexpensive and requires minimal equipment and allows us to take advantage of some of our beautiful natural surrounds.

However, research suggests that between 30% and 80% of recreational runners sustain a running-related injury at some point in their training. These injuries can cause disruption to training and prevent participation in events.

Having a previous running-related injury

This is a risk factor for further injury for two reasons. Firstly, the ‘new’ injury may be an exacerbation of an old injury that was not completely recovered, or secondly, a new injury may be caused by runners changing their running pattern (gait) to protect an older injury and therefore cause a new problem.

High amount of training per week

Higher volumes of running per week are associated with an increased risk of injury due to the heavier load on joints and tissues.

‘Too much too soon’

If we gradually increase the distances that we run, our muscle, tendon, and bone cells can respond to this increased workload and increase their ‘strength’ and endurance. However, if we increase this workload too quickly, these structures can start to break down. The chart below shows the increased injury risk associated with higher rates of increased training load per week. Note that if a runner tries to double their training load each week they put themselves at a 50% chance of creating an injury! 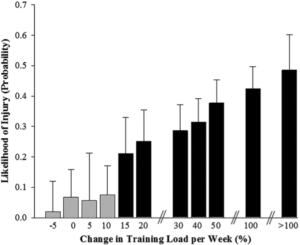 Incorporating speed training and hill runs into training too soon or too quickly also increases the stress on our joints and soft tissue making them more prone to injury. Speed work and sprinting tends to place the runner into more of a tip-toed running gait, increasing the strain on their calf and other muscles. Hill running does a similar thing by forcing us to propel ourselves upwards, using greater amounts of force.

Gait analysis can be used to assess gait abnormalities that lead to injury.

One of our highly trained physiotherapists will be able to identify abnormalities in your gait simply by watching you run on our treadmill. Video can be used to slow down your running action for both assessment and correction purposes.

Running gait analysis can show us the following variables:

Approximately 50% of injuries we see in runners are knee injuries. Some examples are:

Other common running injuries include:

Early signs of an injury